Last week I decided to look into how to create a source list that is backed by Core Data with section headers created from code. New to Cocoa I set out to Google for a solution but surprisingly enough I didn’t find a lot about how to achieve this (or I simply googled for the wrong things). After a few days I managed to derive, what I believe, an elegant solution to this and figured it could be useful for others wanting to do this. 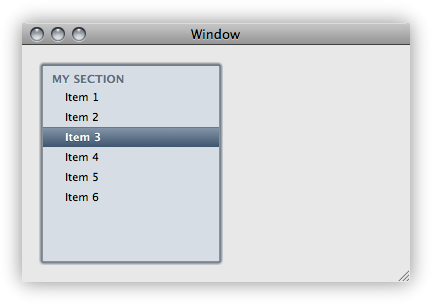 My first plan was to create some kind of layer in between Core Data and the NSTreeController but that quickly added a lot of complexity and code. The second solution was to create the headers and put them in Core Data the first time you start the application. While this was easily done it felt a bit hackish.

After spending a couple of days with this, trying out various solutions and ideas me and Richard discussed the topic, wondering if maybe Core Data had some builtin support for this.

Twenty minutes and some fifty lines of code later I looked at the screen, amazed at how awesome Core Data is. This is what I ended up with, mind though that it’s not a full tutorial but only the crucial steps, you still need to know how to connect it all with the NSTreeController and NSOutlineView.

The idea is to use two different persistent stores, the regular XML store and an in memory store for the code generated entites.

For the purpose of this example the data model is very simple, two entities called Section (for the code generated section headers) and Item (for the entities that are read from Core Data).

The NSTreeController has a property called childrenKeyPath that defines the key path to retrieve an array of children from each of the nodes in the tree. All nodes displayed in the tree need to respond to this key path. Since Items don’t have children it is not included in the data model (though you could have added it in the model designer but in my opinion isn’t as nice), I will instead create a subclass of NSManagedObject to represent an Item.

Select the Item entity in the model designer and create a new file (File->New File and choose Managed Object Class from the Cocoa section). Simply name it Item.m (and check the Also create “Item.h”) box. Add a method children to your Item class.

This method will be called by the NSTreeController when it is populating the tree and since an Item doesn’t have any children it should return nil.

That’s it for the model, time to setup the stores.

I extended the method persistentStoreCoordinator in the auto generated application delegate to create a second store with the URL memory://store. This store should be of the type NSInMemoryStoreType which means that any entity tied to it won’t be saved to disk.

Both of these stores act in the same context so the layers on top of Core Data won’t know the difference between entites in one store or another.

Here the message assignObject:toPersistentStore: is sent to the NSManagedObjectContext to put the newly created Section in the in memory store so that it is not saved to disk with the Items.

I also added an action to my application delegate to create new Items and make them children to the Section.

That’s it! Now a regular NSTreeController can be used in entity mode by setting the entity to Section as you would normally do.

I’d love to get feedback on better solutions, improvements or just comments on what you think.